2020 is a record-breaking year for collective action in the tech sector.
JS Tan and Nataliya Nedzhvetskaya

For most people, the Covid-19 pandemic has turned 2020 into one of the lowest points in recent memory. However for the tech sector, the pandemic has fast-tracked the digital transformation of all aspects of life and given tech companies record-breaking valuations that reflect current optimism.

Among tech workers, the pandemic highlighted existing inequalities. While some workers had the privilege of working from home, others were either forced to report to work or found their jobs entirely eliminated. The Black Lives Matter movement also led to an increase in anti-racist actions as the industry began to grapple with its long-standing lack of diversity.

There were a number of milestones. Kickstarter United made history in February when it became the first major tech union in the U.S. Warehouse workers at Amazon, in light of the company’s handling of the pandemic, have also begun to take significant steps towards unionization. The recent termination of Dr. Timnit Gebru has ignited an industry-wide conversation about diversity and inclusivity.

1. The number of reported collective actions by tech workers reached a new record. 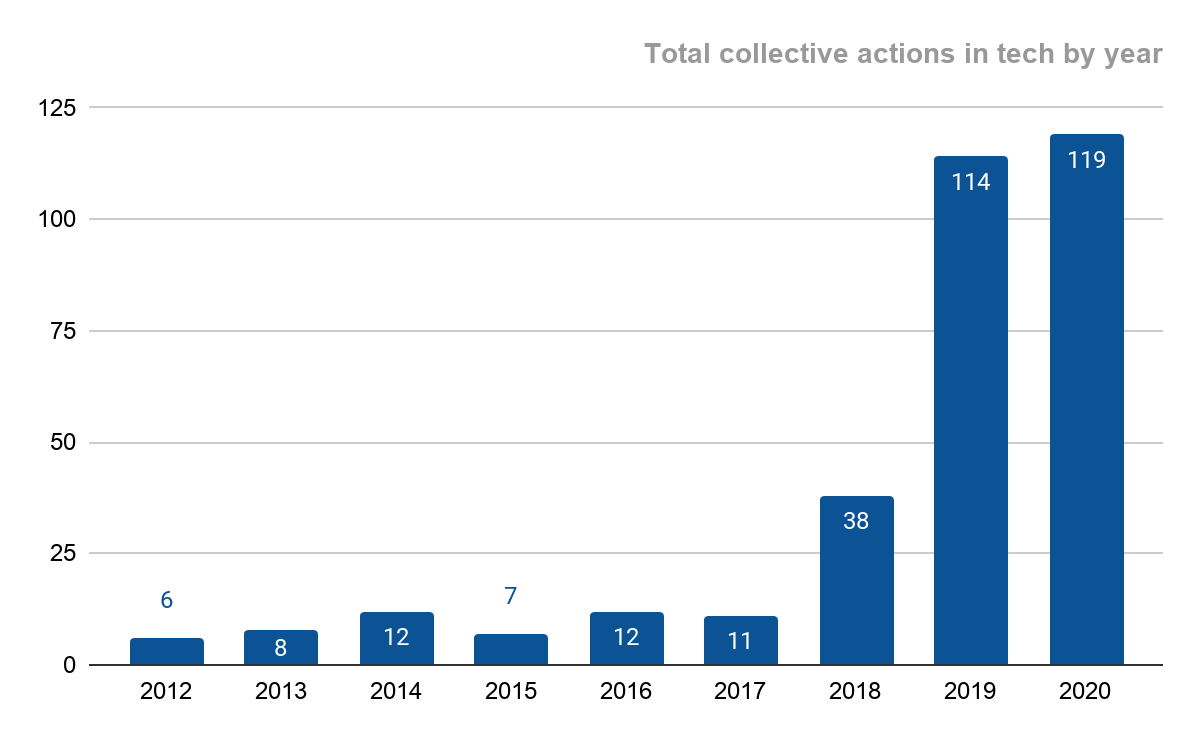 2020 was another record year for collective actions in tech, but by a slim margin: 119 events versus 114 in the prior year. Because our archive relies on events that have been publicly reported, it is possible that either the real growth rate has stabilized or that reporting on the tech worker movement has peaked. In a year where 47% of New York Times stories mentioned the pandemic, it is possible that more actions went unreported this year than they may have otherwise. 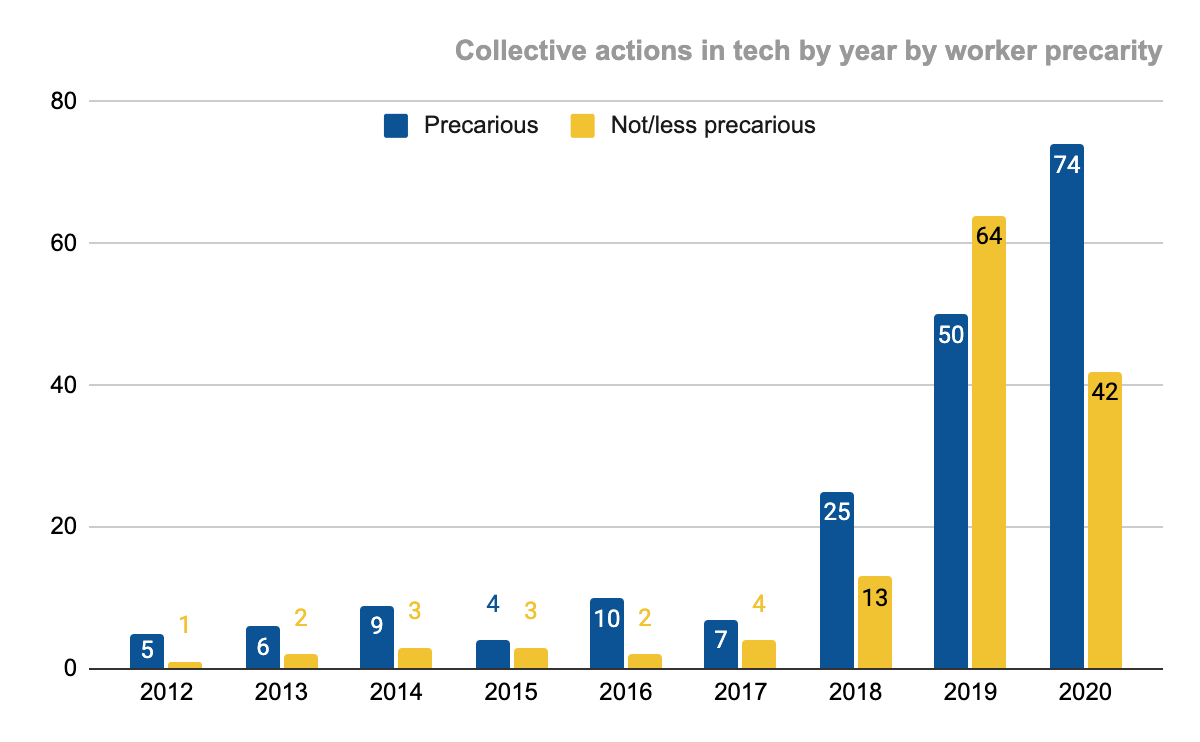 Here, “precarious work” is defined as actions involving gig workers, contract workers, or blue collar workers. From this graph, we see that even though the growth of collective action in tech is slowing down in aggregate, collective action among precarious workers continues to grow. This is also reflected in the significant drop in white-collar actions from 2019 to 2020. Our previous analysis shows that blue-collar workers led the majority of covid-related actions. Protesters listed safer working conditions, hazard pay, and improved health benefits, among their demands.

3. Amazon workers were more active than employees at any other company. 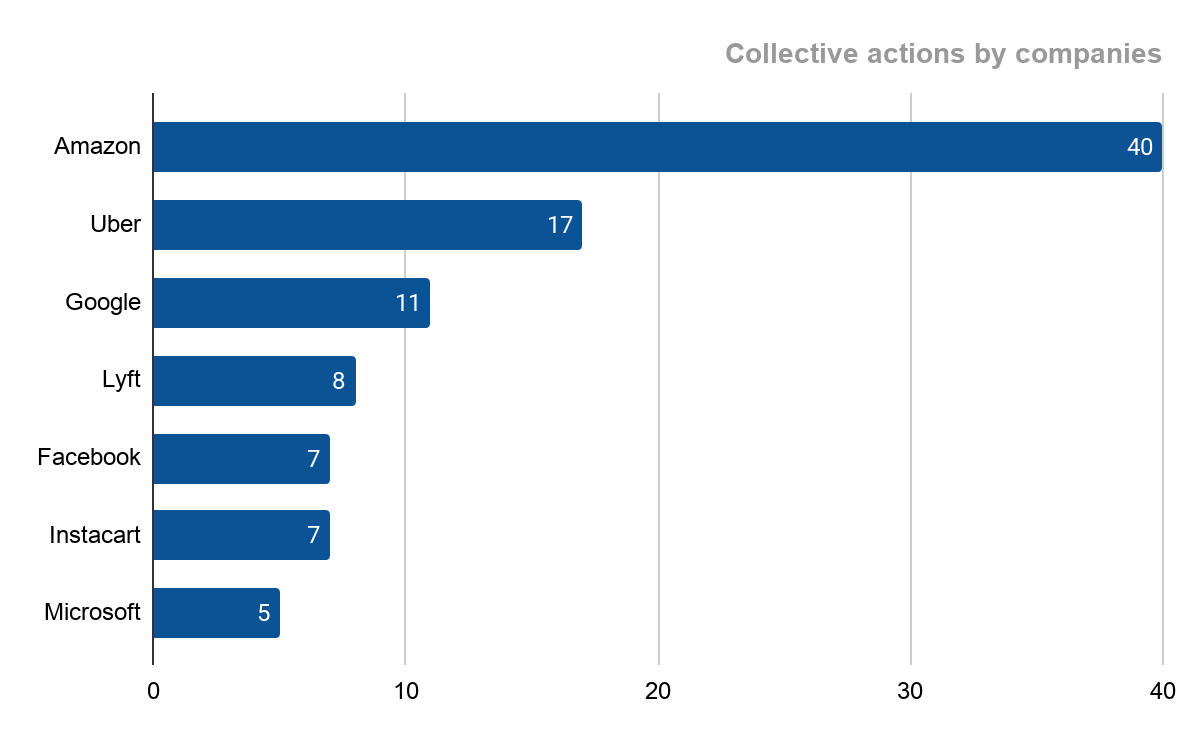 Amazon workers have become the main driver of collective action in the tech sector. They’ve held more actions than Google, Microsoft, Facebook, and Apple employee’s combined. The majority (75%) of these actions were directly related to Covid-19. The upcoming union vote in Bessemer, Alabama has brought increased attention to the company, which currently represents one of the largest workforces in America.

* We believe that there are many more actions from Amazon warehouse workers that we have not yet archived, especially outside of the U.S.

4. Tech workers are responding to COVID-19 and the BLM movement. 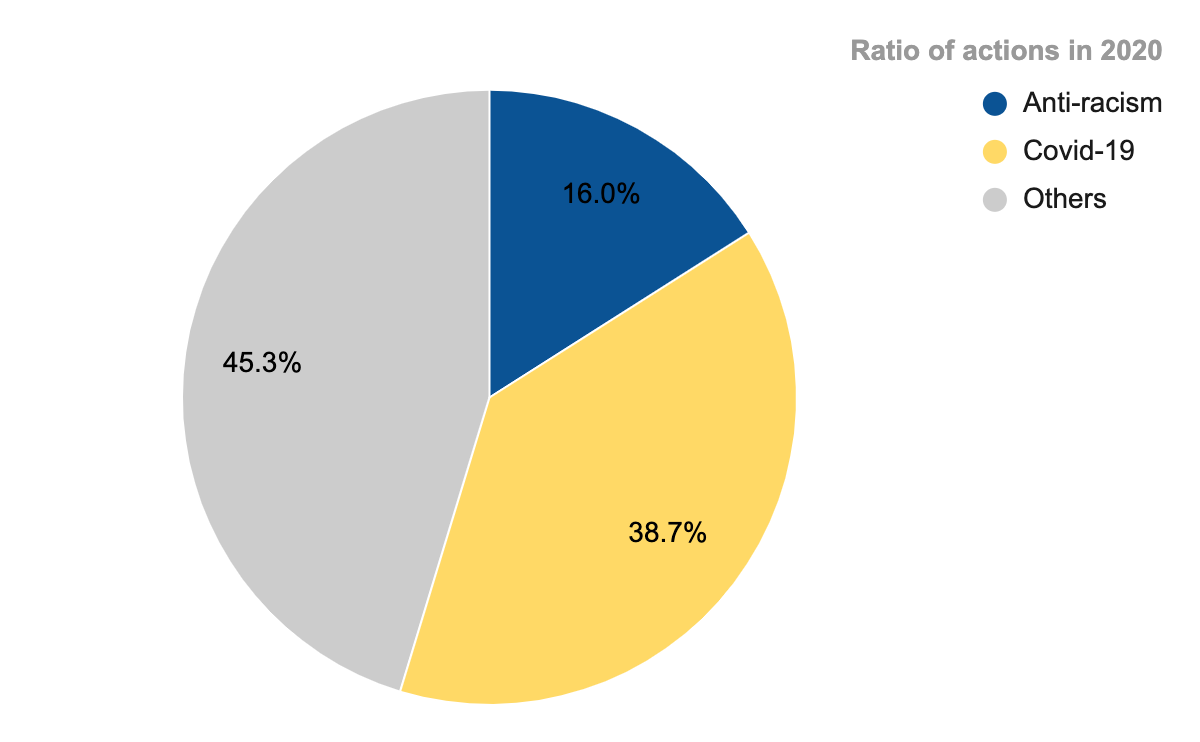 Actions against racism, which included virtual walkouts in protest of George Floyd’s killing and an open letter calling for greater transparency into the firing of Dr. Timnit Gebru at Google, made up 16% of actions by tech workers this year or 19 total. This represented a substantial increase over previous years.

The earliest anti-racism action documented in our archive dates back to 1970, when Black IBM workers founded the National Black Workers’ Alliance of IBM. The workers gathered internal data on salaries and supported fellow workers who faced retaliation. Despite long-standing racial inequality and discrimination within the industry, there were only 2 actions explicitly protesting racism in 2019, and none in 2018. 2020 represents a significant improvement over prior years but also shows how far the industry still has to go. 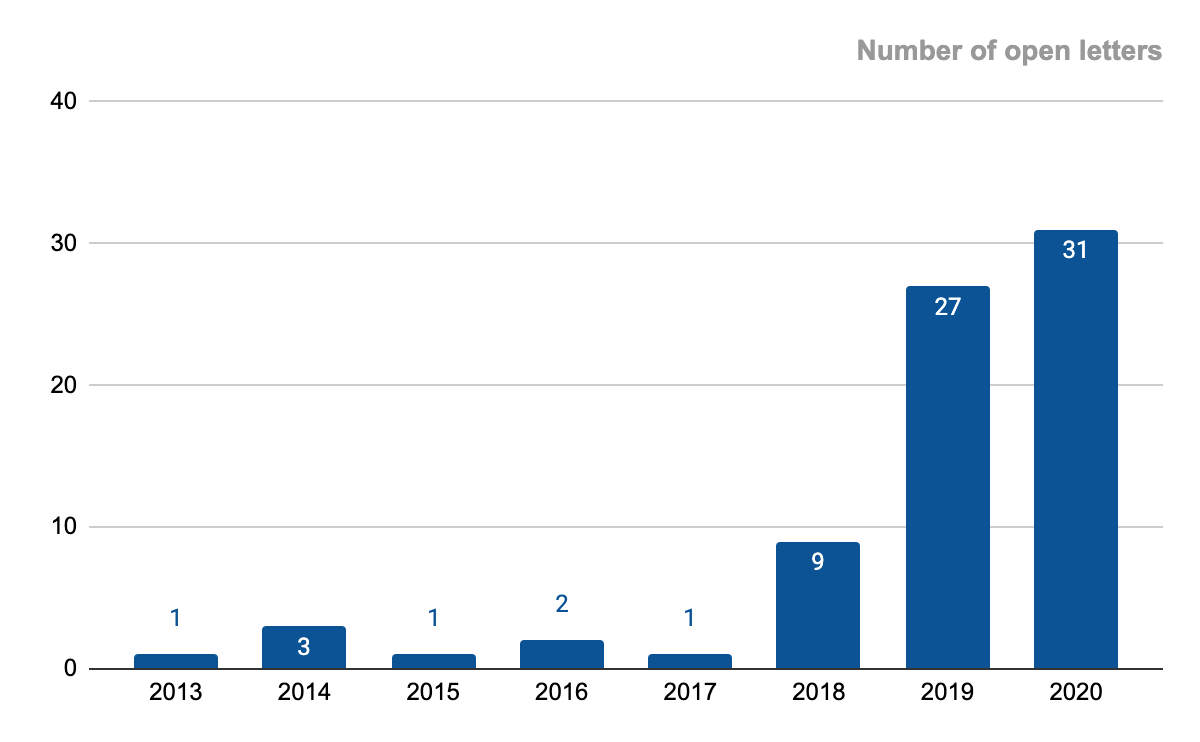 In 2020, tech workers continued to show resistance in the form of open letters. Of the 31 open letters written this year, the majority (18) were written by white collar workers. Historically, open letters have been a good way to raise awareness of an issue, but there is little evidence that the demands made in open letters are consistently met.

6. Tech workers are starting to unionize and form works councils.

2020 marks the year with the highest number of unionizations we’ve ever seen in the tech industry, including Kickstarter United, which made history as the first tech union by in-house workers in the U.S., and the first national tech workers union in the U.K.

In 2020, we’ve seen a slow-down in the growth of collective action in the tech industry. This in part can be explained by the pandemic which, in forcing white collar tech workers to work from home, has also atomized them and dislocated them from their workplaces. This slow-down, especially among white collar tech workers, also comes after a round of retaliation from Google and Amazon in 2019 and early this year. This included firing vocal employee activists and hiring union busting firms.

However, a slow-down in the growth of collective action does not necessarily mean that organizing initiatives are also slowing down. Our dataset only documents actions that have been made public. In light of Covid-19 and tech companies cracking down on employee activists, it may be time for organizers in the industry to rely less on the public-facing actions, and focus instead on building a resilient base. The movement may already be headed in that direction.

Our dataset is publicly available at data.collectiveaction.tech.

A worker perspective from a union organizer at HCL

The leader of the first union in Amazon’s history gives his thoughts on what makes for a successful campaign.

A worker perspective from a union organizer at Kickstarter.

Collective Action in Tech is a project to advance the tech workers movement.

Support us on Patreon.